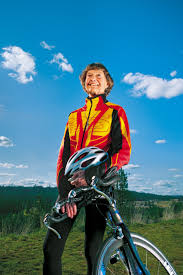 The Olympics are over now but one doesn’t have to wait four years for another inspiring story of remarkable athleticism. Madonna Buder, also known as the Iron Nun, is a Catholic religious sister and Senior Olympian triathlete. In 2012, at the age of 82, Sister Buder became the oldest person to complete an Iron Man Triathlon, a record that still stands today.

The Sister is the author of The Grace to Race, in which she recounts the deep faith that inspired her extraordinary journey from a prominent St. Louis family to a Catholic Convent and the events that led her to start running at the age of 52.  “It is my faith that carried me through life’s ups and downs,” she writes.  “Whenever injured, I wait for the Lord to pick me up again and set me on my feet, confidently reminding Him, ‘God, you know, my intent is to keep running toward you.'”

In a recent article Today News reported, “Sister Madonna Buder was the only person to get a standing ovation at the awards ceremony for the USA Triathlon Age Group National Championships on Aug. 13 in Omaha, Nebraska. It wasn’t because she had the best time or broke any records, but rather that she was the only person to compete in the 85-plus age category.  The 86-year-old nun has become something of a celebrity in recent years; she’s been featured in numerous articles, highlighted in the book If Nuns Ruled the World: Ten Sisters On A Mission, and most recently appeared in a Nike commercial.”

She has completed over 325 triathlons including 45 Ironman Distances, and was inducted into the USA Triathlon Hall of Fame in 2014. She says, “Determination is the mind willing something to happen by the grace of God.”