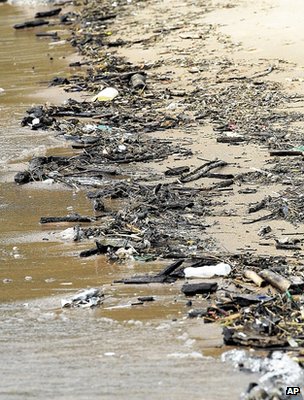 Microscopic plastic debris from washing clothes is accumulating in the marine environment and could be entering the food chain, a study has warned.

Researchers traced the “microplastic” back to synthetic clothes, which released up to 1,900 tiny fibres per garment every time they were washed.

Earlier research showed plastic smaller than 1mm were being eaten by animals and getting into the food chain.

The findings appeared in the journal Environmental Science and Technology .

“Research we had done before… showed that when we looked at all the bits of plastic in the environment, about 80% was made up from smaller bits of plastic,” said co-author Mark Browne, an ecologist now based at the University of California, Santa Barbara.

“This really led us to the idea of what sorts of plastic are there and where did they come from.”

Dr Browne, a member of the US-based research network National Center for Ecological Analysis and Synthesis , said the tiny plastic was a concern because evidence showed that it was making its way into the food chain.

“Once the plastics had been eaten, it transferred from [the animals’] stomachs to their circulation system and actually accumulated in their cells,” he told BBC News.

In order to identify how widespread the presence of microplastic was on shorelines, the team took samples from 18 beaches around the globe, including the UK, India and Singapore.

“We found that there was no sample from around the world that did not contain pieces of microplastic.” 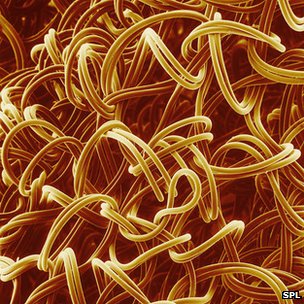 Dr Browne added: “Most of the plastic seemed to be fibrous.

The data also showed that the concentration of microplastic was greatest in areas near large urban centres.

In order to test the idea that sewerage discharges were the source of the plastic discharges, the team worked with a local authority in New South Wales, Australia.

“We found exactly the same proportion of plastics,” Dr Browne revealed, which led the team to conclude that their suspicions had been correct.

As a result, Dr Browne his colleague Professor Richard Thompson from the University of Plymouth, UK carried out a number of experiments to see what fibres were contained in the water discharge from washing machines.

“We were quite surprised. Some polyester garments released more than 1,900 fibres per garment, per wash,” Dr Browne observed.

“It suggests to us that a large proportion of the fibres we were finding in the environment, in the strongest evidence yet, was derived from the sewerage as a consequence from washing clothes.”

by Mark Kinver, Environment reporter, BBC News
"...An important source of microplastic appears to be through sewage contaminated by fibers from washing clothes. Forensic evaluation of microplastic from sediments showed that the proportions of polyester and acrylic fibers used in clothing resembled those found in habitats that receive sewage-discharges and sewage-effluent itself. Experiments sampling wastewater from domestic washing machines demonstrated that a single garment can produce >1900 fibers per wash. This suggests that a large proportion of microplastic fibers found in the marine environment may be derived from sewage as a consequence of washing of clothes. As the human population grows and people use more synthetic textiles, contamination of habitats and animals by microplastic is likely to increase." http://pubs.acs.org/doi/abs/10.1021/es201811s