“Erich von Däniken’s undisputed strength is the ability to combine imagination and science without loosing touch with the real world.” 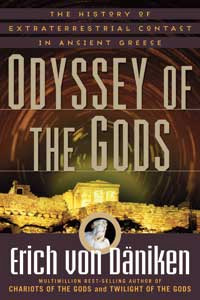 San Francisco, CA —— The multiâ€millionâ€copy bestselling author of Chariots of the Gods, Erich von Däniken is headed to the top of the book lists again with his new title, Odyssey of the Gods: The History of Extraterrestrial Contact in Ancient Greece.

Von Däniken’s gameâ€changing Chariots of the Gods rocked traditional beliefs about ancient history. Now, he tackles the history of Greece again with a new viewpoint using painstaking archaeological research and evidence from the writings of Plato and Aristotle. He suggests that Greek myths were, in fact, very much a reality, and that the Greek gods were extraterrestrial beings that arrived on Earth thousands of years ago.

The author’s conclusions may seem astounding, yet they are argued with such insight and knowledge that readers are forced to consider the implications of his findings for mankind.

-A revolutionary interpretation of the sites and legends of ancient Greece

-The conflict between alien gods and humans

-The true origin of centaurs, the Cyclops, and other mythical creatures

-A startling new explanation of the Atlantis legend

Fluent in four languages, the charismatic author travels 100,000 miles a year to remote places to explore the phenomena about which he writes. He appears frequently on the international lecture circuit, in documentaries and on TV, and he is chairman of the Archaeology, Astronautics and SETI Research Association(AASRA), which has 10,000 members, and a regular contributor to its magazine, Legendary Times.

Von Däniken is wellâ€known in the United States, where he won instant fame as a result of the TV special ÊºIn Search of Ancient Astronauts,Êº based on Chariots of the Gods.

Title: Odyssey of the Gods: The History of Extraterrestrial Contact in Ancient Greece >

by Mallory Clay, Warwick Associates
Since the publishing of bestseller Chariots of the Gods in 1968, Erick von Däniken has become one of the most widely read and mostâ€copied nonfiction authors in the world, selling more than 63 million copies. He is the author of 31 books, including the recent Twilight of the Gods and History Is Wrong (both published by New Page Books). Several of his titles have been made into films. The author has participated and contributed to numerous film and TV productions, and has written countless articles and compilations. His ideas have been the inspiration for a wide range of TV series, including the History Channel’s hit program, “Ancient Aliens”.