Can people strengthen the brain circuits associated with happiness and positive behavior, just as we’re able to strengthen muscles with exercise?

Richard Davidson, who for decades has practiced Buddhist-style meditation — a form of mental exercise, he says— insists that we can.

And Davidson, who has been meditating since visiting India as a Harvard grad student in the 1970s, has credibility on the subject beyond his own experience. 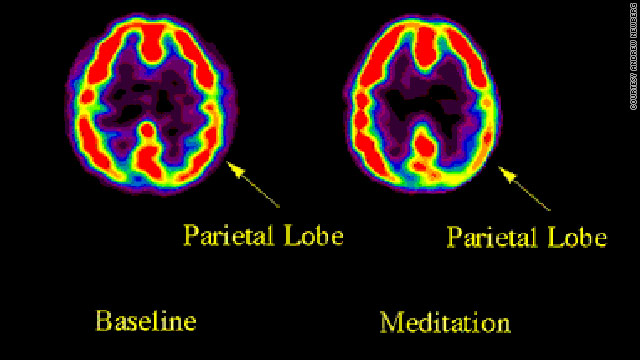 A trained psychologist based at the University of Wisconsin, Madison, he has become the leader of a relatively new field called contemplative neuroscience – the brain science of meditation.

Over the last decade, Davidson and his colleagues have produced scientific evidence for the theory that meditation – the ancient eastern practice of sitting, usually accompanied by focusing on certain objects – permanently changes the brain for the better.

“We all know that if you engage in certain kinds of exercise on a regular basis you can strengthen certain muscle groups in predictable ways,” Davidson says in his office at the University of Wisconsin, where his research team has hosted scores of Buddhist monks and other meditators for brain scans.

“Strengthening neural systems is not fundamentally different,” he says. “It’s basically replacing certain habits of mind with other habits.”

Contemplative neuroscientists say that making a habit of meditation can strengthen brain circuits responsible for maintaining concentration and generating empathy.

One recent study by Davidson’s team found that novice meditators stimulated their limbic systems – the brain’s emotional network – during the practice of compassion meditation, an ancient Tibetan Buddhist practice.

But the study also found that expert meditators – monks with more than 10,000 hours of practice – showed significantly greater activation of their limbic systems. The monks appeared to have permanently changed their brains to be more empathetic.

An earlier study by some of the same researchers found that committed meditators experienced sustained changes in baseline brain function, meaning that they had changed the way their brains operated even outside of meditation.

These changes included ramped-up activation of a brain region thought to be responsible for generating positive emotions, called the left-sided anterior region. The researchers found this change in novice meditators who’d enrolled in a course in mindfulness meditation – a technique that borrows heavily from Buddhism – that lasted just eight weeks.

But most brain research around meditation is still preliminary, waiting to be corroborated by other scientists. Meditation’s psychological benefits and its use in treatments for conditions as diverse as depression and chronic pain are more widely acknowledged.

Serious brain science around meditation has emerged only in about the last decade, since the birth of functional MRI allowed scientists to begin watching the brain and monitoring its changes in relatively real time.

Beginning in the late 1990s, a University of Pennsylvania-based researcher named Andrew Newberg said that his brain scans of experienced meditators showed the prefrontal cortex – the area of the brain that houses attention – surging into overdrive during meditation while the brain region governing our orientation in time and space, called the superior parietal lobe, went dark. (One of his scans is pictured, above.)

Newberg said his findings explained why meditators are able to cultivate intense concentration while also describing feelings of transcendence during meditation.

But some scientists said Newberg was over-interpreting his brain scans. Others said he failed to specify the kind of meditation he was studying, making his studies impossible to reproduce. His popular books, like Why God Won’t Go Away, caused more eye-rolling among neuroscientists, who said he hyped his findings to goose sales.

“It caused mainstream scientists to say that the only work that has been done in the field is of terrible quality,” says Alasdair Coles, a lecturer in neurology at England’s University of Cambridge.

To read the rest of this article, please click here to visit CNN’s Belief Blog More on Meditation from Merlian News >

by CNN's Dan Gilgoff
The CNN Belief Blog covers the faith angles of the day's biggest stories, from breaking news to politics to entertainment, fostering a global conversation about the role of religion and belief in readers' lives. It's edited by CNN's Dan Gilgoff and Eric Marrapodi, with daily contributions from CNN's worldwide newsgathering team and frequent posts from religion scholar and author Stephen Prothero.