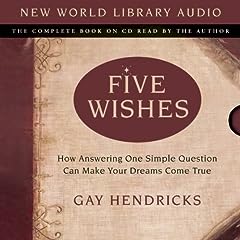 When he was in his thirties, Gay Hendricks was asked one simple questions that changed the course of his life; now he gives readers of all ages and backgrounds that same simple questions, and shows how answering it can lead to wealth, wisdom, and a joyful, fulfilled life.

Trapped at a cocktail party he didn’t want to be, author Gay Hendricks met a stranger. Deciding that they both hated small talk, they jumped right into life’s deeper questions. This perfect stranger asked Gay to imagine that when his is on his deathbed, five years from now or fifty years from now, the man would come by and ask him, “Was your life a complete success?” Gay would either say yes or no. Then the man said, “If you said no, you would have some reasons why it wasn’t- what would be the things you’d wish had happened that would have made it a success?”

Gay’s first response was, “I never enjoyed a long and happy marriage…I wish I’d enjoyed a lifelong blossoming of passion and creativity with a woman.”

Then the man said something that turned out to powerfully affect Gay’s life: “Okay, now turn the wish into a goal, and put it in the present tense, as if its happening at this moment.”

Gay said: “My life is a total success because I enjoy a happy marriage with a woman I adore and who adores me…”

“Okay,” the man said, “What’s the second thing you would wish had happened that would have made your life a success?”

“Who the hell are you, anyway?” said Gay. The man turned out to be Ed Steinbrecher, a well known spiritual teacher and astrologer. Eventually Gay ended up making five wishes and, by framing them the way Ed showed him, they turned into five powerful affirmations that changed the course of his life, and have guided his life ever since. Over the years, every one of his five wishes came true.

A chance meeting. Deep questions and a little prodding from a friend Neale Donald Walsch have produced a short, suprisingly simple process that readers can use to jumpstart the power within.

Five Wishes: How Answering One Simple Questions Can Make All Your Dreams Come True (Amazon.com)

by Monique Muhlenkcamp, New World Library
Gay Hendricks is an internationally famous author, seminar leader, web entrepreneur, and filmmaker. He is the author of more than 20 books, including the national bestseller Conscious Loving and the founder of the Spiritual Cinema Circle. He resides with his wife, author and seminar leader Kathlyn Hendricks, in Ojai, California. www.Hendricks.com