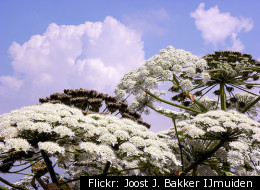 The giant hogweed is a stunning plant–reaching up to 12 feet tall with flowers as big as umbrellas– but it’s also dangerous. Its sap can cause third degree burns and blindness and New York environmental officials are worried the plant is spreading across the state at an alarming rate, The New Daily News reports .

Officials have found 944 sites in New York, according to The News, including some in Nassau County, L.I., and Putnam County, where the green monster is flourishing.

The Department of Environmental Conservation has even set up a special Hogweed Hotline 845-256-3111 for New Yorkers to call in sightings of the invasive species. Callers are asked to take photos and report site information, but should avoid touching the plant. (You can also check out photos in this handy giant hogweed identification guide .)

“If the sap gets on your skin and it’s exposed to sunlight . . . you end up with third-degree burns, oozing and scars,” Naja Kraus, the DEC’s Giant Hogweed Program coordinator, told The New York Post , adding, “If it gets in your eyes, you can go blind.”

Kraus also told The Post her office has received reports of kids using the plant’s 4-inch-wide stems as telescopes, putting them up to their eyes — and getting severe burns on their faces. And one DEC technician who was exposed to the plant “got a horrible burn on her leg that she still has to cover up,” Kraus said.

The DEC says the giant hogweed is “a native of the Caucasus Mountain region between the Black and Caspian Seas. It was introduced to Europe and the United Kingdom in the late nineteenth century and to the United States in the early twentieth century as an ornamental garden plant”.

The DEC released a map (see below) showing giant hogweed density by county. And although there are no reports of hogweed in New York City as of yet, Krauss told the Post “Just because it hasn’t been reported doesn’t mean it isn’t there.”. 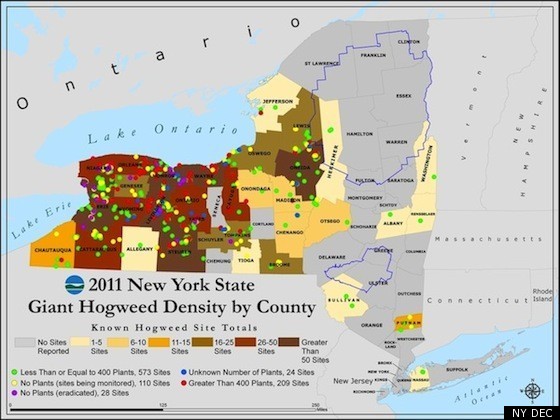 by The Huffington Post
Characteristics of the giant hogweed plant:1.White flowers with 50-150 flower rays clustered into an umbrella shaped flower cluster up to 2.5 feet across, 2.Between 7 and 14 feet tall (depending upon growth stage and if mowed or cut), 3.Huge leaves, incised and deeply lobed up to 5 feet across, 4.Stems are green with extensive purple splotches and prominent course white hairs. Stems are also hollow, ridged, 2-4 inches in diameter, and have a thick circle of hairs at base of leaf stalk, 5.Seeds are dry, flattened, and oval. Approximately 3/8 inch long and tan with brown lines (oil tubes) extending 3/4 of the seed length that widen at ends, 6.Many plants are often misidentified as giant hogweed - the most common plant being cow parsnip. Please thoroughly look through the charts below to see the major differences between giant hogweed and cow parsnip, angelica, wild parsnip, and poison hemlock. www.dec.ny.gov/animals/72766.html