“If you want to get involved in Jamie’s Revolution, you can sign the petition–see the link below. When we first heard the term “Food Revolution,” we weren’t exactly sure what that meant. Did a lazy Susan suddenly start spinning out of control? Was ketchup attempting a hostile takeover to dethrone salsa as top condiment? But then, with world-renowned chef and best-selling author Jamie Oliver’s name attached, we knew it was going to be all about “good food.” Enough said. Yes, Jamie Oliver is here to start a revolution. The impassioned chef is taking on obesity, heart disease and diabetes in the USA, where our nation’s children are the first generation NOT expected to live as long as their parents. Now that’s scary! Jamie is inviting viewers to take a stand and change the way America eats, in our home kitchens, schools and workplaces with the thought-provoking new series, Jamie Oliver’s Food Revolution.

In the six-part series, Jamie heads to Huntington, West Virginia. Why? Well, Huntington has been called the unhealthiest city in America. Jamie wants to do something about that. Through his efforts in this one town, he hopes to start a chain reaction of positive change across the country. Jamie says, “There’s an incredible community in Huntington, and I want this experience to be a celebration of what we can achieve when people come together.” Jamie goes on to say, “Wonderful stories will unfold in Huntington, and hopefully this will inspire the rest of the States.” Sounds like a plan! Needled by local naysayers, challenged by ingrained unhealthy habits and government bureaucracy, and welcomed by some of the most surprising youngsters, families and local leaders, Jamie shows how, in just a few short months, he tried to transform Huntington as a template for the entire country. The stakes? Simply the health of our country’s citizens and the legacy for its children. The series is loosely based on Jamie Oliver’s U.K. series, Jamie’s Ministry of Food and Jamie’s School Dinners, which saw his successful grass-roots efforts improve the school lunches in communities there. For the latter show, it resulted in a total overhaul of the school dinner program in the U.K. In America, he’s turning his attention to helping people of all ages eat more balanced meals and cook with fresh ingredients, not only at schools, but also homes, and workplaces. 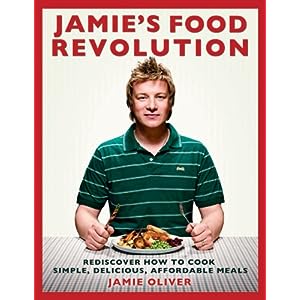 Jamie’s recent television credits include Oprah’s Big Give for ABC. He is the author of nine popular cookbooks, including “The Naked Chef“, “Cook with Jamie” and “Jamie at Home.” Hyperion published his latest cookbook, “Jamie’s Food Revolution: Rediscover How to Cook Simple, Delicious, Affordable Meals“, in October 2009. Packed with quick, flavorful recipes and step-by-step photos shows beginning and accomplished cooks how to achieve great results with fresh ingredients. We can’t wait to see how Jamie makes out in Huntington. We’re also curious to see if his efforts there catch on in other places. Let the revolution begin!” If you want to get more involved in Jamie’s revolution, you can sign Jamie’s food petition.

For the original article and more information, click here!

In 2004, motivated by the poor state of school dinners in UK schools, Jamie embarked on one of his most ambitious ventures to date. He went back to school with the aim of educating and motivating the kids and dinner ladies to enjoy cooking and eating healthy, nutritious lunches rather than the processed foods that they were used to. Jamie launched a national campaign called Feed Me Better ( www.feedmebetter.com ) and launched an online petition for better school meals. As a result of the 271,677 signatures on the petition, which Jamie took to 10 Downing Street on 30th March 2005, the government pledged an extra Â£280 million to improve the standard of school meals, to provide training for dinner ladies and equipment for schools. Over seven months of hard work and constant filming culminated in the award-winning series Jamie’s School Dinners, shown on Channel 4. The series prompted a public outcry for change to the school meals system and was awarded Best Factual programme at the UK National TV Awards. Jamie also received a special award for his contribution to television at the National TV awards.

A follow-up documentary, Jamie’s Return To School Dinners aired on Channel 4 in September 2006 and as a result of Jamie’s new findings the British government made further investment in school meals and food education for school children. Click here for the full bio!

by ABC.com
Jamie Oliver is a phenomenon in the world of food. He is one of the world’s best-loved television personalities and one of Britain’s most famous exports. Jamie has had huge success with television series The Naked Chef (BBC), Jamie’s Kitchen, Jamie’s School Dinners, Jamie’s Great Italian Escape, Return to School Dinners, Jamie’s Chef, Jamie at Home , Jamie’s Ministry of Food , Jamie Does.... and more recently Jamie’s 30 Minute Meals and the Emmy Award-winning Jamie’s Food Revolution (ABC), as well as the one-off specials Jamie’s Fowl Dinners, Eat To Save Your Life, Jamie Saves Our Bacon and Jamie’s Fish Suppers (all for Channel 4). More below...