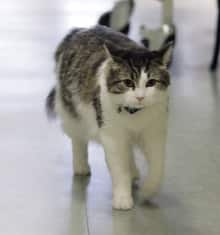 A two year old cat has become a symbol of death at a Rhode Island nursing home, lying beside patients in their last hours, according to an essay in the New England Journal of Medicine.

Dr. David Dosa, a geriatrician at the Steere House Nursing and Rehabilitation Center in Providence, described the incident on Thursday in a short essay entitled A Day in the Life of Oscar the Cat.

According to the article, since he arrived at the home two years ago, the cat has been at 25 patients’ sides who have passed away.

“He doesn’t make too many mistakes. He seems to understand when patients are about to die.” Dr. Dosa

Oscar was adopted as a kitten and grew up on the center’s third-floor dementia unit, which treats patients with Alzheimer’s, Parkinson’s disease and other illnesses.

At times the cat will patiently wait outside the door, but once inside, the cat leaps onto beds and sniffs the air. According to Dr. Dosa, if the cat leaves, the patient is not likely to die that day.

But when Oscar curls up on the bed, staff take notice. They start calling family members because the patient usually dies within four hours.

“Usually indifferent and sometimes unfriendly to staff and visitors, Oscar purrs and nuzzles the patients during their final hours,” Dosa said.

For the cat’s efforts, a plaque mounted on the wall reads: “For his compassionate hospice care, this plaque is awarded to Oscar the Cat.”

Experts have tried to rationalize Oscar’s behavior, theorizing that he could be responding to scents given off by the patient or the behavior of the staff.

“I do think there is some biochemical reason, some odor or smell is helping the cat sense,” said Dr. Joan Teno, a physician at the Steere House nursing home.

“Those behaviors have really won me over to this cat.”