DHARAMSALA, India – “Tibetan monks and nuns spend their lives studying the inner world of the mind rather than the physical world of matter. Yet for one month this spring a group of 91 monastics devoted themselves to the corporeal realm of science.

Instead of delving into Buddhist texts on karma and emptiness, they learned about Galileo’s law of accelerated motion, chromosomes, neurons and the Big Bang, among other far-ranging topics.

To add to the challenge, some monastics have limited English and relied on Tibetan translators to absorb the four-week crash course in physics, biology, neuroscience and math and logic taught by teachers from Emory University in Atlanta.

The Emory Tibet Science Initiative, of which this session was part, is now in its second year. It was preceded by the “Science for Monks” program, which started in 2001 with support from Bobby Sager, a Boston philanthropist. At the behest of the Dalai Lama, the earlier program brought science teachers from various American universities to teach Tibetan monks in India.

“They are sophisticated adult learners,” said Mark Risjord, professor of philosophy at Emory who taught math and logic this summer. During his weeklong unit, inquisitive monks pressed him for a method to “make deductively valid rules” and asked if different arguments can lead to the same conclusion.

Although Buddhist scriptures have their own explanations of nature, the mind and the physical world, students were unfazed about seeming contradictions between Buddhism and western science.

“There are contradictions within Buddhist philosophy itself,” pointed out Lobsang Gompo, a 27-year-old monk from Drepung monastery in south India. Tibetan Buddhists are already accustomed to analyzing multiple viewpoints, he said.

The Dalai Lama’s confidence in “critical investigation” means that “if scientific analysis were conclusively to demonstrate certain claims in Buddhism to be false, then we must accept the findings of science and abandon those claims,” he wrote in “The Universe in a Single Atom.” 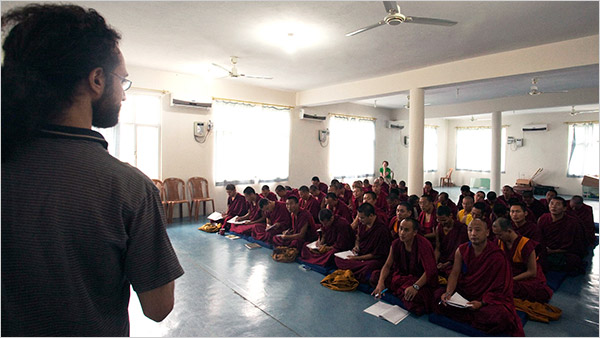 by Amy Yee
There are other reasons for integrating science with Tibetan Buddhism. Tibetans marked the 50th anniversary of their exile this year, and a return to their homeland remains elusive. The need to keep Tibetan cultural identity alive, yet modern and relevant, has grown increasingly urgent as the 73-year-old Dalai Lama ages.