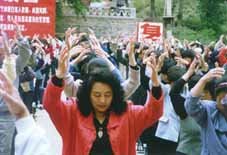 Huaxia Zhineng Qigong Clinic & Training Center*, simply known as the Center, normally has more than four thousand people living there, including doctors, patients, ChiLel teachers, trainees, and supporting personnel. The Center was established in 1988 in the city of Zigachong and later, in 1992, relocated to the city of Qinhuangdao. In 1995, it again expanded to its present address, an old army hospital in the city of Fengrun, two hours by train from Beijing. It is directed by its founder, Dr. Pang Ming, a Qigong grandmaster and physician trained in both Western and Chinese traditional medicine. This hospital is the largest of its kind in China and probably in the world. The Center avoids medicines and special diets in favor of exercise, love, and life energy. It is a non-profit organization and is recognized by the Chinese government as a legitimate clinic. Over the years, the Center has treated more than one hundred and eighty diseases, the overall success rate being more than 95%.

I spent the entire month of May living in the Center, observing first hand how the hospital operates and interviewing more than one hundred people who have miraculously recovered from incurable diseases such as cancer , diabetes , arthritis , heart disease , severe depression , paralysis , and systemic lupus . Many times I was moved to tears while listening to these accounts of heroic struggle against disease. One mother told me that she was so weak that she couldn’t even pick up a kitchen knife to kill herself and so attempted to end her life by not eating. But when her six-year-old son tried to spoon feed her a bowl of milk while her eleven-year-old held a towel to wipe any spills, she decided to live at any cost. Since doctors couldn’t help her, she turned to ChiLel and, against all odds, recovered. She is now a teacher at the Center.

The Power of ChiLel ChiLel, the method employed in the Center, was developed by Dr. Pang. The method is based on the 5,000-year-old concept of qigong (chigong, chi kung) as well as modern medical knowledge. Dr. Pang, reverently known as Lao-shi, the Teacher, has written more than nine books on ChiLel. 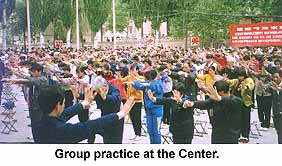 Strong belief (Shan Shin): a belief that chi or life energy, can heal all ailments, including one’s own. Students build belief by listening to testimonials of recovered patients and learning about chi and its healing effects. Group Healing (Chu Chong): before a group of students begins ChiLel, the teacher verbally synchronizes the thinking of the group to obtain chi from the universe and bring it down into a healing energy field, shrouding everyone including the teacher himself or herself. The healing effect is enhanced because the group is acting as one. Chi Healing (Fa Chi): Facilitating chi healing by teachers teachers bring healing energy from the universe to each individual to facilitate healing. Practice (Lan Gong): Students learn easy-to-follow ChiLel movements and practice them over and over again. The methods, parts of Zhineng qigong, are called: Lift Chi Up and Pour Chi Down Method. Three Centers Merge Standing Method.

Patient Treatment When a patient enters the hospital, he is diagnosed by a doctor, and then assigned to a class of fifty or so people for a 24-day treatment period. He spends most of his time practicing ChiLel, eight hours a day without television, newspapers or telephone. Those who can stand up practice standing; those who can sit practice in their chairs; and those who can’t move practice in their beds. I was moved by the dedication of these students.

Despite its amazing success at healing, the Center is little known even in China because of its policy of not advertising in newspapers or magazines. However, the Center is well known among its estimated eight million ChiLel practitioners. Through word of mouth, thousands of people from all over China are coming to the Center every month. Indeed, ChiLel has a great number of followers and the Center is the brain of this vast organization. New techniques for treating diseases are developed daily.

For example, a new way of demonstrating the effectiveness of chi for treating cancer has been developed. I witnessed a cancer patient being treated by four ChiLel teachers while the patient’s bladder cancer was viewed on a screen via an ultra-sound machine, and monitored by two doctors. The cancer literally disappeared in front of my eyes in less than a minute as the teachers emitted chi into the patient, dissolving the cancer! In fact, I videotaped this incredible act. Ten days later, I requested the doctors to double check if the patient’s tumor was gone. Kindly enough the doctors put the same patient’s bladder again on screen and we saw no trace of cancer. Later I was told that a major German TV station crew, visiting the Center a week before, had successfully videotaped the same process with other cancer patients. 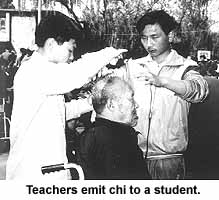 The Center has over six hundred staff members, including twenty-six Western-trained doctors. Since no medicine is prescribed, there aren’t any pharmacists. Doctors, who prefer to be called teachers, play only a minor role in this special hospital. Occasionally, they are called upon to attend emergency cases. Their main function is to diagnose patients when they come in to register and again after each 24-day training period.

Their diagnoses are classified into four categories for statistical purposes.

In the Center, no matter how sick a person is, he is still addressed as a “student” never “patient”. Why? Because he is learning an art the goal of which is to heal oneself, not to rely on doctors. Therefore no doctor-patient relationships exist.

Students are enrolled in a 24-days treatment program. The tuition fee is only one hundred yuan (about twelve dollars). Students can spend as little as six hundred yuan (about seventy dollars) per month! The Center is probably the most inexpensive hospital in the world and is truly a non-profit organization. Yet the Center is an independent, self-sufficient organization, without any help from government or private foundations.

How do they operate so efficiently? Because many of the doctors, ChiLel teachers, and supporting personnel are former students who have recovered from serious illnesses themselves and have now returned voluntarily to “serve the sick”, with very little pay. Teachers play the roles of doctor, nurse, social worker, cheerleader, parent, friend, brother, and sister. Their effectiveness is measured by the healing rate of their students.

Another reason for the Center’s effective but low-budget operation is that it uses group therapy. Students live in groups of four, eight or sixteen persons per room. By living in groups, students develop in a cooperative spirit of caring and love toward each other. Many of those I interviewed had been rejected by their former hospitals as “incurable,” and, therefore, had regarded the Center as their last hope. As though sailing on the same boat in the ocean, students bond together against their common enemy’s disease.

Trained to Heal Just as hospitals associate with medical schools to train young people to enter into the medical profession, the Center also has ChiLel schools to train ChiLel professionals. There is a Zhineng Qigong Academy and one-month and three-month instructor training schools. The Academy, established in 1992, has a two-year training program for young men and women under the age of thirty who have the minimum of a high-school education. The one-month and three-months instructor-training programs are for anyone interested in ChiLel. I was told that there are typically more than a thousand students in both programs in school.

In addition, just as prestigious hospitals have research programs, the Center has many on-going research projects both on site and at different university campuses around the country. When I requested the person in charge, a retired college professor, to show me some published papers, he gave me two volumes of experiment data, as thick as a telephone book!

Besides doctors, teachers, and students, there are hundreds of supporting personnel, working in the office, cafeteria, bookstore, and so on. All of them are ChiLel practitioners and they practice ChiLel together in the morning and in the evening, about three hours a day. As they say, it is not just a job, it is a ChiLel job. 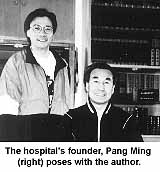 The Center is open only ten months a year because of lack of heating in the rooms during winter. The Center is currently building a home for itself, a “ChiLel City” in a place near Beijing, with better facilities to accommodate the ever-increasing number of students, including Americans and others coming from abroad.

I asked the founder, Lao-shi, why didn’t he promote ChiLel to the world sooner. He replied that many people need proof whether chi works or not. So instead of arguing with others, he preferred to work solidly by treating patients and collecting valuable data. As a result, tens of thousands of documented cases over a period of eight years have been collected and, “Now we are ready. Please tell the world that we exist and ChiLel can benefit mankind.”

* Due to political reasons, the Center was closed in 2001.

*Master Gu will teach the profound techniques prescribed by the worlds largest medicine-less Qigong hospital in China here in the US, in California. This hospital has a 95% success rate working with over 200,000 patients and treating more than 185 diseases. To Visit Their Website, Click Here.

Qi Summit: Open Your Heart, Be the Change

Body and Mind Are One: An Online Training Course in Mindfulness with Thich Nhat Hanh

“When your body and mind work together as one, you are fully and naturally present in the moment. This is the essence of mindfulness practice. Body and Mind Are One: An Online Training in Mindfulness brings you an unparalleled eight-week course with the venerable Thich Nhat Hanh, who has practiced, shared, and lived this profound wisdom for over seven decades.” Begins April 16 th, 2012

AgeSong Institute: A Charitable Fund For Our Elder Care and Educational Programs

“AgeSong Institute is an eldercare program of Pacific Institute, a non-profit organization. AgeSong Institute is dedicated to changing the mainstream view of aging. Rather than viewing aging as something to be avoided, we see it as an important phenomenon of life. Aging provides humans with the opportunity to mature and become elders in the true sense of the word: people of wisdom, rich in life experience, able to help us humans and our planet become more aware.”

Do You Viv? Learn How You Can Help The Planet This Earth Day & Every Day!

Viv is an incredibly simple way for you to help your local businesses become more green. It doesn’t cost you a thing and you don’t have to make trade-offs on what you buy. ” We are about empowering consumers. We are about empowering businesses. We are about real green change. Simply put, we want to put sustainability on steroids and enable you to drive the change. The beauty of it is that it is not that hard to do, but we need a lot of people and organizations to join us as partners to pull it off. We have a vision that everyone can embrace. It’s super simple, it’s really real, and it does a lot of green. Strap in and join us for the adventure.”

M.A.Concentration in Community Mental Health at The California Institute of Integral Studies

Accredited American university one of the first of its kind to offer graduate degree programs, awarding MAs, in holistic studies. This school offers a total of seven Masters Degrees (MA) in such holistic subjects as Consciousness Studies, Holistic Health Education, Transformative Arts, Integral Psychology and Counseling Psychology (with specializations in either Somatic Psychology, Transpersonal Psychology or Holistic Studies.)