Science and the Akashic Field by Ervin Laszlo, is an interesting book about the information stored and accessed in the Akashic field. According to Laszlo the A-field provides everything from single celled organisms to the cosmos with information to assist in the development and evolution of their systems. Once these systems have run their course the information is then sent back to the A-field to once again assist in the development and evolution of other organisms and masses. “The principal kinds of anomalies today are anomalies of coherence and correlation. Coherence is a well-known phenomenon in physics: in it’s ordinary form, it refers to light as being composed of waves that have a constant difference in phase. Coherence means that a phase relations remain constant and processes and rhythms are harmonized. Ordinary light sources are coherent over a few meters; lasers, microwaves, and other technological light sources remain coherent for considerably greater distances. But the kind of coherence discovered today is more complex and remarkable than the standard form, indicating a quasi-instant tuning together of the parts or elements of a system, whether that system is an atom, an organism, or galaxy. All parts of a system of such coherence are so correlated that what happens to one part also happens to the other parts. “ 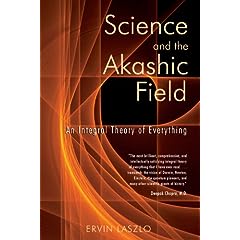 Essentially, the A-field is of such a coherence that it remains discoverable today. Additionally, with new discoveries and the help of quantum physics, theories of the beginning of everything and why we have thumbs have begun popping up often. Ervin Laszlo’s Science and the Akashic Field, addresses some of these theories and explains just exactly what they might mean.

This book combines science and philosophy in a way that opens one’s mind and is inspirational.

Ervin Laszlo is the author or editor of 69 books translated into as many as 19 languages, and has over four hundred articles and research papers and six volumes of piano recordings to his credit. He serves as Editor of the monthly World Futures: The Journal of General Evolution and of its associated General Evolution Studies book series. View our Booklist