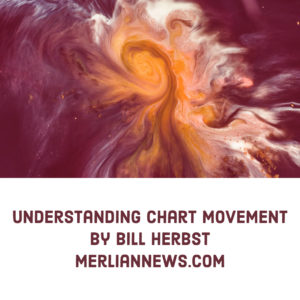 Published with the kind permission of Bill Herbst

When people begin to study astrology, their first efforts usually revolve around memorizing the meanings of the various symbolic elements – planets, signs, houses, and aspects. That’s fine so far as it goes, but learning all the separate pieces doesn’t prepare students to understand what a chart is and how it moves.Charts seem to be static, but they’re not. They’re just stop-action. Everything is actually in motion. Understanding those motions is a great help in knowing how to read the map.

To that end, a visual metaphor may come in handy.

Imagine that you’re in a helicopter about 2,000 feet above the ground. Next, imagine that you can look down directly beneath you to see a circular railroad track. This track is divided into twelve different sections. It might help to visualize the ground inside the track as if it were a pie, where we’ve cut the pie into twelve slices.

The track is like the houses with their twelve numbered sections. This circular section of track doesn’t move, of course. It just sits there, fixed in the ground. In much the same way, the houses appear to be fixed in the chart. The 1st house is always on the left (or east,) the 7th always on the right (or west); the 10th is directly overhead, and the 4th directly underfoot.

Each pie-shaped section inside the track represents one house. If we wanted to get fancy, we could imagine various coordinated color schemes to represent the qualities of each house or section of track. For instance, we could use reds for the 1st, 5th, and 9th houses, green for the 2nd, 6th, and 10th, yellow for the3rd, 7th, and 11th, and blue for the 4th, 8th, and 12th. Or we could use different colors to blend the elemental quality with the modal or axis relationship – pastels might work. But it’s your visualization, so hire your own imaginary painters and do it up however you wish. For now, just imagine that the track has twelve sections.

Train = Zodiac and its Signs

The train of twelve cars represents the zodiac, with its twelve signs. The engine represents the sign Aries while the caboose is the sign Pisces. The train moves continuously around the track, but very slowly. Our train is just a “local” – once each day it makes one round trip, a complete circuit of the track.

This is what happens in the heavens from our vantage point; as the Earth turns on its axis, we here on the Earth’s surface have the experience of remaining stationary, and we perceive the heavens around us turning one complete cycle in a 24-hour period. That’s why the sun appears to “rise” and “set.” Some idiot critics have accused astrology of not knowing the “objective” motions of the solar system, implying that we don’t understand that the earth revolves around the sun. Well, that’s just silly. Of course we understand. That’s not the point.

The issue is one of perspective. No one speaks of “earthrise” or “earthset.” We talk in terms of our own subjective experience – sunrise and sunset. For the most part, natal astrology is a human-centered discipline. We attempt to symbolically understand the cosmos through the lens of an individual life, so we use that person’s unique perspective. Duh. In fairness, astrology does offer heliocentric charts, for those who want to see things from the viewpoint of the Sun. But that’s another story entirely.

From our viewpoint, the zodiac train makes one trip around the house track every day. As a general rule, each car (sign) takes roughly two hours to travel over a certain section of track (house), although that varies because the train doesn’t move at a constant speed, instead fluctuating through gradual accelerations and decelerations. So imagine the train speeding up a little then slowing down again as it makes its daily circuit around the track. [For the technically-minded, this is referred to in astrology as “signs of long and short ascension,” but for now, just think of the train moving once each day around the track.]

So far so good. Next we’ll add the planets, and this is where the metaphor gets interesting.

The planets are like passengers on the train. How many passengers are aboard? Traditional astrology uses ten bodies (the Sun and Moon, called “lights,” and the eight major planets). Since the 1970s, science has identified literally thousands of other bodies in the solar system, so astrologers now have the option of adding many other symbolic passengers to the train – asteroids, comets, etc. Some astrologers’ charts are littered with passengers, while other astrologers prefer to stick to only the major bodies. I personally use eleven celestial bodies in my chart – the ten standard ones plus another called Chiron.

However many passengers we use, they’re all moving gradually through the train, very slowly changing seats, passing through one car until they run out of seats and have to move to the next car. They move backwards through the train, from the engine toward the caboose, and then round again – in a direction opposite to the train’s movement over the track.

For instance, the Moon, the fastest-moving body, is the astrological equivalent of a little kid with ants in his pants who can’t sit still and bounces from one seat to the next, changing cars about every two and a half days, or every two and a half “trips” the train makes around the track. To get through all twelve cars of the whole train takes the Moon one month, or roughly 28 trips. [That’s what a “month” is – the length of one passage of our Moon around the heavens.)

At the other end of the speed scale, Pluto is like an old man who can barely walk. He takes two steps and has to rest seemingly forever. Currently, it takes Pluto about 13 years just to move from one car to another. That means it will take him nearly 5,000 complete daily trips of the train just to get out of one car and intothe next. And that’s fast for Pluto. He stays in some cars as long as 22 years. All told, to make even a single passage through the twelve cars of the entire train takes him more than 90,000 trips. Since Mr. Pluto is very, very slow, it’s a big deal when he changes train cars (signs). Pluto moved into the “car” called Sagittarius in 1995, and he won’t make it into the next car, Capricorn, until 2008.

No wonder charts are complicated.

Now, imagine all this motion happening together. Everything is constantly moving, shifting, changing relationship to everything else. At any given moment, a certain passenger is in a certain car of the train, which is moving over a certain section of track, and the passengers as a group form a kaleidoscopic pattern; sometimes they’re all together, sometimes they’re spread out, sometimes they all occupy one half the train, leaving the other half empty. The variations are endless, and they never repeat exactly.

If we took a photograph from our helicopter, freezing the various motions, stopping the action like a slice out of time, then we would have a picture of the train, the track, the passengers, and their relationships to one another. Signs, houses, planets, and aspects.

Erecting a natal chart by hand with ephemerides and tables of houses is like developing that photo in a darkroom, which is how most astrologers worked decades ago. We had to laboriously calculate the exact positions within all the various motions. Now, however, we use computers to erect charts, which are the equivalent to digital cameras – instant snapshot.

That’s essentially what a horoscope is – a picture of all these complex celestial motions and their interrelationships, frozen at an instant in time, as seen from a specific point of view in space. In natal astrology, our point of view is that of an individual human being taking life’s first breath, establishing both bodily independence and the life-rhythm of prana. When we look at a natal chart with all those arcane symbols dotted around the circle, all those colored lines drawn inside the circle between the symbols, what we’re seeing is an accurate diagram of the different celestial motions as they were configured from that particular infant’s vantage point at birth. We’re looking at a mandala of that individual’s view of the solar system, his or her unique perspective on the cosmos. And we seek to understand the symbolic meanings of that time-space moment.

Learning the various movements is simple but essential. If you understand what you’re really seeing when you look at a natal chart, whether it’s your own or someone else’s, then you’ll have a tremendous head start toward using astrology with reverence as well as savvy.

Bill Herbst resides in Minneapolis, Minnesota. To schedule a personal session,or sign up for the newsletter, send an email to bill@billherbst.com

Endings and Beginnings by Lisa Karmen

We are living in extraordinary, evolutionary times. It is important to know and to see that there is new life (and vast potential!) growing in the rubble. 2017 was a “1” year in numerology representing the beginning of a pioneering new cycle. 2018 was a “2” year representing the Divine Feminine and the development of peace, balance, cooperation, partnership, and unity between differing entities. 2019 is a “3” year. 3 is the first number given the meaning ALL, it represents creative power and growth. 3 is a moving forward of energy overcoming duality, it is manifestation and synthesis. 3 is also the number of cycles: birth, life, death; beginning, middle end; past, present, future.

Odyssey of a Creatress by Madeline K. Adams

Odyssey of a Creatress is a wonderful memoir of one woman’s spiritual journey to uncover and awaken the sacred feminine within her psyche, eventually allowing it to inspire and guide her life. Subtitled “A Heroine’s Journey to uncover the Essence of her Feminine Soul,” this book is not just for women – as Madeline Adams writes in her introduction, “My story is unashamedly about the feminine, as a primary creative principle, that exists in the lives of men and women.” As the author makes clear, it is through honoring the feminine in both men and women that balance and healing occur.

This week is potent. On Thursday, March 1st we have a full Moon in Virgo the sign of differentiation and the ability to analyze as well as the physical body. The spectrum of Virgo analysis ranges from discernment on the positive side to excessive criticism on the negative side. Virgo also symbolizes distillation, purity, and devotion to that which serves the higher good.