Fred Alan Wolf is a theoretical physicist and writer on the subjects of quantum physics, consciousness, and their relationship. He is a science popularizer on the Discovery Channel, and is the author of eleven books. His theories about the interrelation of consciousness and quantum physics have been described in a Newsweek editorial as “on the fringes of mainstream science.”

Dr. Wolf has appeared as the resident physicist on the Discovery Channel program The Know Zone, was a participant in the PBS series Closer to Truth, and has appeared on radio talk shows and television shows across the United States and abroad.

He is an honored member of the Martin Luther King, Jr. Collegium of Scholars and has taught courses at the Philosophical Research Society and the Holmes Institute. He is an Assessing Editor for the Journal of Mind and Behavior.

Wolf also appeared in the films What the#$*! Do We Know!? (2004), The Secret (2006) and Spirit Space (2008). He has lectured on subjects related to quantum physics and consciousness since the 1960s, often under the name Dr. Quantum or Captain Quantum. He is also featured in the documentary about the Dalai Lama entitled Dalai Lama Renaissance. 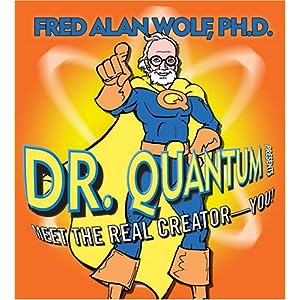 His book Taking the Quantum Leap: The New Physics for Nonscientists won the National Book Award as science paperback for 1980 from the National Book Foundation. Dr. Wolf’s books have been translated into Spanish, Portuguese, German, Italian, Chinese, Korean, Dutch, and Japanese.

Wolf has taught at San Diego State University, the University of Paris, the Hebrew University of Jerusalem, the University of London, and Birkbeck College. Wolf is best known for his contributions through technical papers and popular books, but he is frequently in demand as a lecturer, keynote speaker, and consultant to industry and the media.

by www.fredalanwolf.com
Wolf's interest in physics began as a child when he viewed a newsreel depicting the world's first atomic explosion.This fascination continued, leading Wolf to study mathematics and physics. Wolf received his Ph.D. in theoretical physics from UCLA in 1963 and began researching the field of high atmospheric particle behavior following a nuclear explosion and worked on Projection Orion-a nuclear propulsion scheme designed for deep space exploration. Wolf's inquiring mind has delved into the relationship between human consciousness, psychology, physiology, the mystical, and the spiritual. His investigations have taken him from intimate discussions with physicist David Bohm to the magical and mysterious jungles of Peru, from master classes with Nobel Laureate Richard Feynman to the high deserts of Mexico, from a significant meeting with Werner Heisenberg to the hot coals of a fire walk.