Based on the book “King of Travelers: Jesus’ Lost Years in India” by Edward Martin 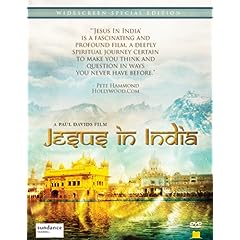 Jesus in India is an exciting film, sure to leave the audience wondering, and questioning their assumptions about the drama of Jesus’ life and death. Filmed in Iarge part in India, the teeming cities and spectacular Himalayan vistas are the perfect backdrop for the startling premise — that Jesus spent “the lost years” from ages 13 to 30 — traveling throughout south Asia and learning from the gurus and yogis there.

The film is based upon Edward Martin’s book “King of Travelers: Jesus’ Lost Years in India.” Martin first developed his thesis several years ago after working and traveling in India, first as a Peace Corps volunteer and later as a journalist. The film re-enacts Martin’s quest to follow the oral lore of Jesus’ visits to the east, as he visits the same Hindu temples, Buddhist monasteries, and villages where Jesus may have walked. Martin searches for any documentation that could prove the theories that he’s been researching for years — first, that Jesus may have spent years in India as a young adult, and second, that Jesus may have survived the crucifixion, returned to India to live out the remainder of his life, and was buried there when he died.

The first theory, that Jesus may have travelled to India, Nepal and Tibet as a young man, is somewhat controversial but does not veer too wildly from scholarly speculation that’s been going on for hundreds of years in an attempt to answer the question, “Why does the Bible say nothing about Jesus’ life or whereabouts after the age of 13 or so, up until he returns to be baptized around the age of 30?” Jesus in India successfully makes the case that India is as valid a location as any other for Jesus’ whereabouts during this period. Indeed, many Christians have no problem believing that he may have traveled to the east, perhaps following the Silk Road or travelling with spice traders and merchants.

It’s the second theory — that Jesus may have survived the crucifixion and then lived in India, or returned to India — that is so controversial. That is where Jesus in India gets really exciting, and that’s what makes this movie a must see. There’s a real tension to the story line as the producers interview those holding wildly opposing views — scholars, priests, yogis, Buddhist monks, and others. The stakes are high here — Christian theologians know that the theme of death and resurrection is critical to the Church, and yet…. The idea that Jesus may have learned from, and incorporated Hindu, Buddhist, and Jain teachings into his message is very powerful. Non-Christians around the world would be more tolerant of a Christianity that was based on common, more inclusive tenets. That idea alone is startling, and if the audience walks away thinking about that, Jesus in India will have done enough.

by Cheryl Shainmark
Paul Davids is a writer of films and novels, especially about science fiction. Often collaborating with his wife, Hollace, Davids has written and directed the films Starry Night, Roswell a documentary about the Roswell UFO incident and Timothy Leary's Dead. He also written episodes for the television series Transformers as well as a spin-off Star Wars series with his wife informally known as the Jedi Prince series.He also directed, in 2005, a documentary called The Sci-Fi Boys, featuring interviews with Forry Ackerman, Ray Bradbury, Ray Harryhausen, and many more sci-fi notables.At Christmas 2008, Davids launched his controversial film 'Jesus in India' about Edward T. Martin's book discovering the detail of the missing years of Jesus' life.