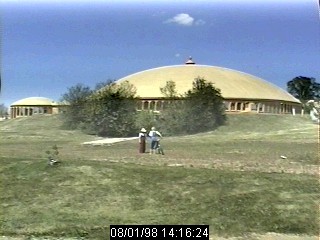 Fairfield was mostly a small farming town with a modest collegiate population of Parsons College until 1973. Parsons closed and Maharishi re-opened the campus as Maharishi International University (now Maharishi University of Management), bringing in droves of meditators.

“Maharishi Mahesh Yogi attracted many celebrated allies to his cherished desire for world peace—The Beatles, film director David Lynch, singer-songwriter Moby are just a few. Since his passing on February 5, 2008 at age 97, his TM Movement and its proponents have continued to attract new meditators. Six-million-plus TM meditators around the world—both the unsung and the celebrated—enjoy the benefits of Maharishi’s TM: health and wealth; dynamic creativity and increased energy; inner peace and happiness—ingredients for world peace.” Rik Merchant, Yahoo! Contributor Network

The Sidhis include mentally altering the local gravitational curvature of space time geometry .

The Golden Dome helps to give rise to Stage III Yogic Flyers within a few generations, as part of an ideal community for human development. 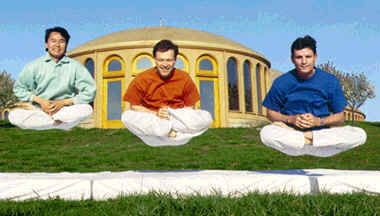 Can Meditation Change Your Brain? Contemplative Neuroscientists Believe It Can by CNN’s Dan Gilgoff

David Lynch To Get Meditation In Schools

More on Meditation from MerlianNews!

by Reviewer
"Action is always based on the level of consciousness. A man can only see red when he has red glasses on, and then he cannot see anything other than red. In the same way, when we raise a person's level of consciousness, he can only behave rightly. An ideal society will result from people's spontaneous right behavior, which will take within its fold all the necessary considerations for the proper sense of values for their own interests and for the interests of other people. An ideal society can never be created by telling people the importance of caring for the interests of others. A balanced life can only grow in society when every action is spontaneously able to accommodate both the interests of the individual and the interests of those around him, and this will be on the basis of his ability to perform action that is spontaneously in accordance with all the laws of nature. Only action in accordance with nature will simultaneously satisfy the interests of the individual, society, and the cosmos." Maharishi