“Damanhur is an internationally renowned center for spiritual research. Located in Valchiusella Valley, in the Alpine foothills of northern Italy, Damanhur is a Federation of Communities and Regions with over 800 citizens, a social and political structure, a Constitution, 40 economic activities, its own currency, schools and a daily paper . They have a university that attracts philosophical and spiritual students of all ages from all over the world. They describe themselves as “the result of the practical application of a spiritual philosophy in harmony with the environment and our Planet.”

Airaudi and his supporters bought property in the Italian Alps, in a region of Piedmont less than 30 miles north of the city of Turin. Two dozen pioneers organized the initial settlement. It was named Damanhur after an Egyptian city, located 100 miles ” northwest of Cairo in the middle of the western Delta. It was once the site of the city of Tmn-Hor, dedicated to Horus.” The group grew to include 200 “citizens” in 1985, 450 by 1998, and exceeded 800 in 2000. In addition, there are hundreds of associated members who donate to the community and attend some of its functions. Member satisfaction appears to be high; very few citizens leave the community.

Damanhur is a unique spiritual and religious group whose beliefs are derived from several ancient sources: Celtic Paganism, Celtic Christianity, Egyptian and Greek Pagan religion. Influences from Gnosticism , the New Age and Theosophy are also present.

They believe in an extensive pantheon of supernatural beings, consisting of: a single, unknowable God, Intermediate or Primeval Deities of which nine are self-generated. The remainder have been created by humanity, Entities , including angels, demons and nature spirits.

The first human was a Primeval Deity who suffered a fall and merged with a human body. One of the goals of Damanhur is to help individuals return to what they call the original “subtler” pre-fall state.

In common with many New Age spiritualities, they regard the earth as a living entity. They believe that a series of synchronic lines traverse its surface. The community located their site at what they believe is a point of convergence of three such lines. These “rivers of energy surround the earth and link it to the universe.”

They believe that a major ecological disaster may occur in the near future. They view one of their major tasks as attempting to reintegrate the Earth and preventing the catastrophe.

They believe that three “Mother worlds” were initially created; one each for humans, plants and nature spirits.

They have developed techniques that allow individuals to contact what they call the “race minds” of humanity and of animals. 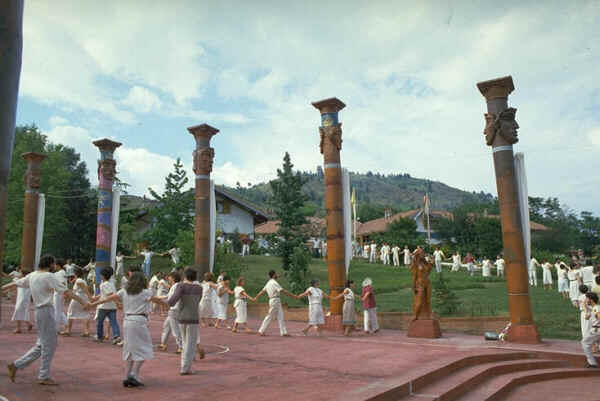 Members of the community live in homes. Each contains about ten to 15 people — adult citizens with their children. Although their eventual goal is self-sufficiency, many citizens hold jobs outside of the community. Many married couples have joined Damanhur and live communally with other couples. Single individuals have also joined the community. Many have entered into one, two or three year provisional marriages. Most of the latter are renewed at the end of their term. The result is a form of serial monogamy for some members, that is not unlike the lifestyle seen elsewhere in industrialized countries. Citizens abandon the use of their family names and adopt two new names when they join the community. The first is the name of an animal species, the second is of a plant.

The community has a “programmed births” project which attempts to time the arrival of children to meet astrological and economic criteria. They use magic and alchemy practices to promote a return to humanity’s pre-fall state. Unique to Damanhur is “selfic” science — the study of spiral-like forms. The use of tobacco and illegal drugs is prohibited within the community. The most important activity of the community is the construction of its underground temple.

How They Are Organized:

They are organized as a federation of separate communities, with their own constitution, schools, flag, calendar, and daily newspaper. They own “woods, farms, and over 70 buildings including private homes, laboratories, farms, schools, art and crafts studios and semi-industrial units. Citizens can decide for themselves how they will work and contribute to the communal economy. On a voluntary basis, each citizen is encouraged to offer a few hours of work each month to take care of the common facilities such as the gardens, the theatre, the woods and…the continuing creation of the [Underground] Temple.” They maintain their own currency, the Credito, which is tied to the Italian Lira. Their publishing arm is called Edizioni Horus. (Horus is a male deity within the ancient Egyptian religion; he has the face of a hawk). They have produced over 150 titles.

They run many businesses, including web design, health food, china, jewelry, paintings, etc. They have built an Open Temple in Damyl, which is accessible by the public. It contains statues of Greek and Egyptian gods and goddesses. Nearby is an open area which contains symbols from various religious traditions. They expect that Damanhur will expand in a controlled manner. There is a waiting list of individuals who would like to become citizens. There are no plans to transform Damanhur into a geographically dispersed movement. They expect to limit growth to within the province of Turin. Although they spread their beliefs through their publishing business, they do not actively proselytize. 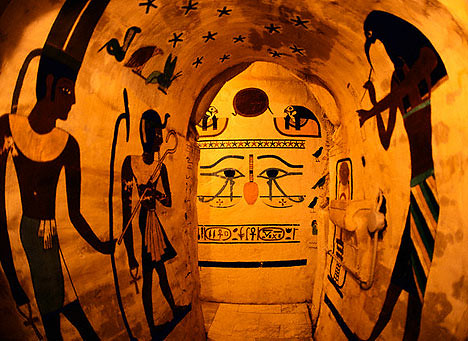 This is a unique underground building carved out of solid rock inside a small mountain. Its existence only became known to the outside world in 1992, after a disgruntled leader, Filippo Cerutti, sued the community. After an investigation, the City of Vidracco ordered the destruction of the temple. It had been constructed without building permits, and was in violation of various zoning regulations. However, public opinion and support from cultural and scientific sources has stalled the enforcement of the order. The community has since resumed construction, and expects to continue for decades into the future.

“The Italian authorities in charge of the preservation of the works of art…declared it a protected ‘collective artistic work.’ For the outside visitor, it is a breathtaking experience, offering -room after room – amazing and unexpected discoveries…There are literally miles of corridors, and thousands of statues, windows and paintings” in the temple.

It contains a series of halls, dedicated to water, the earth, the spheres, metals, and mirrors. The chambers and passages which make up the Temple are aligned to what they believe are three of the earth’s intersecting synchronic lines. The Damanhurians, view the Temple as a type of “alchemic laboratory”. Walking or meditating there is a metaphor for “going deep inside oneself in a spiritual pilgrimage.” “