Some time ago I read a fascinating study about reversing the effects of aging. In 1979, Dr. Ellen Langer, a groundbreaking social scientist, brought together a group of elderly men and had them recreate a week of life in 1959. It seemed that when placed in a setting that replicated the days of their youth, their health improved, and they even looked younger! The men’s muscle strength, dexterity, posture and vision improved, while ailments such as arthritis diminished. It was quite astonishing that all this could happen after only one week. Years later, in 2009, Langer published a wonderful book, Counterclockwise, that tells the story of these men as well as other research she has found that shows how we can turn back the clock on our bodies. It turns out that the mind is the key.

As her website notes, “Counterclockwise shows how we can actively challenge these ingrained behaviors by making subtle changes in our everyday lives. Langer describes ways to reorient our attitudes and language in order to achieve better health; she shows us the ways in which our belief in physical limits constrains us; and she demonstrates how our desire for certainty in medical diagnosis and treatment often prevents us from fully exploiting the power of uncertainty.”

When I heard about her research, I immediately thought of Deepak Chopra (video) and his concept of “Rebooting,” in which he tells us to change our perception of aging. In so doing, we free our minds and body from the “expected” infirmities of getting older. Both Chopra and Langer stress that mindfulness, or thinking of yourself as younger, healthier, even happier, can lead to positive changes in your body. As Lager writes, “Opening our minds to what’s possible, instead of clinging to accepted notions about what’s not, can lead to better health at any age.” 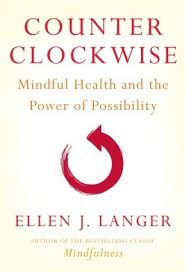 From the time I was very young, I remember that my mother would never tell anybody her age. She would say, “It will lose it’s magic.” As she grew older and her peers got sick and died, my mother remained active and surrounded herself with younger friends. She remained sharp and engaged, and worked up until a month or so before she died. Following these examples, I stay active, reduce stress by practicing mindfulness and qigong, and think of myself as years younger than I actually am. I found Counterclockwise to be a true inspiration for changing one’s mindset and attitudes about aging. It’s certainly worth a try.