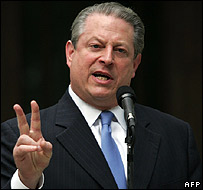 They say changes in the weather are devastating the breathtaking hill state.

Traditional chiefs of the tribe will confer the Grassroot Democracy awards on Al Gore for his campaign for measures to stop global warming.

The tribes people say that they also want to honor him for his 2006 documentary, An Inconvenient Truth, which they say dramatically highlights changes to the environment due to of global warming.

The award will be presented at the second Dorbar Ri (People’s Parliament) on October 6th near a sacred forest at the village of Mawphlang, which has been preserved for more than 700 years.

They say that global climate change is not only affecting the livelihoods of their farmers who depend on sub-soil water, but has even resulted in shortages of drinking water, particularly during winter months.

“Meghalaya will lose the very meaning of its name because of drastic climate change caused by global warming,” said Peter Lyngdoh, a local environmentalist.

The tribes people say that they are also at risk from a greater influx of migrants from Bangladesh, large coastal regions have become submerged, due to global warming and the rising oceans.

“Such huge influxes will reduce us to foreigners in our own land,” says local politician Paul Lyngdoh. 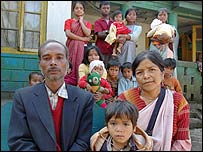 Such fears have prompted the authorities to launch measures of rewarding tribal mothers with cash if they give birth to more than 15 children.

The award will consist of traditional gifts including local handicrafts and a “small amount of money”.

“We hope Mr Gore would be able to bring global attention to what we are facing in our part of the world,” Meghalaya parliament member Robert Kharshing said.

“This whole thing called climate change is affecting us the most.”

Meghalaya literally means “Abode of the Clouds”, and is home to the towns of Cherrapunji and Mawsynram, which compete for the title of wettest place on earth.

But rampant deforestation and global warming means these areas are getting less rain, while the soil is not able to hold water that does arrive, environmentalists say. BBC News

For more information on how to help save energy and fight global warming, visit these links:

by Subir Bhaumik, BBC News, Calcutta
"But rampant deforestation and global warming mean these areas are getting less rain, while the soil is not able to hold water that does arrive, environmentalists say. They say that this is not only affecting the livelihoods of hill farmers who depend on sub-soil water, but has even resulted in shortages of drinking water, particularly during winter months."