Nancy Mehagian is the author of Siren’s Feast — An Edible Odyssey, a culinary memoir. Mehagian takes us through a vivid period (the provocative 60’s and 70’s) of her amazing life and also charts the experience gastronomically, providing fantastic recipes from her Armenian childhood as well as the many countries she has visited along the way for us to sample in our own kitchens. We not only live through her words but can also create, smell and taste the foods she is describing with over forty recipes.

She has been involved with food and healing since 1969, when she opened the first vegetarian restaurant on the Mediterranean island of Ibiza. A native of Phoenix, Arizona, she attended USC and graduated with a degree in English Literature from Arizona State University. She is also a newspaper columnist and writes the Ask a Healer column for the MadashellClub.net.

With a passionate interest in the diets and customs of those who live close to the earth, Nancy has traveled extensively. In 1975 Mary Burmeister, the only living master of the ancient Japanese healing art of Jin Shin Jyutsu, became her life-long mentor. Since 1978, Nancy has maintained an active Massage Therapy and Jin Shin Jyutsu practice in Los Angeles. She accompanied Quincy Jones on his Jook Joint Tour and was the Massage Therapist for the Eagles’ Hell Freezes Over World Tour. Nancy Mehagian has previously published a vegetarian cookbook for children, Supernatural, lectured at health conventions, catered for celebrities and taught gourmet cooking classes, creating cuisine that is healthy, international and authentic.

In this podcast, Nancy Mehagian talks with Merryn Jose about being raised in an Armenian family and how it influenced her life and cooking. Her spiritual quest through the ’60’s & early ’70’s led her to travel the world. On the island of Ibiza in Spain, she opened the first vegetarian health food restaurant. Through a series of later mishaps she was incarcerated in a London prison, along with her newborn baby. Coming full circle Nancy eventually returned home where she discovered her life’s work as a Jin Shin Jyutsu practitioner, under the master Mary Burmeister. 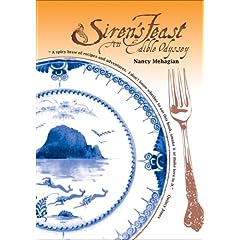 Siren’s Feast- An Edible Odyssey is a GREEN book! It is printed with paper that is Forest Stewardship Council certified!

The Touch of Healing, by Alice Burmeister

Watkins Books are one of the world’s leading specialists in mysticism, occultism, oriental religion, astrology, perennial wisdom and all aspects of contemporary spirituality. “Britain’s premier esoteric bookshop” – The Independant

by Merlian News
Nancy Mehagian has been involved with food and healing since 1969, when she opened the first vegetarian restaurant on the Spanish island of Ibiza. Her recently published culinary memoir, Siren's Feast, An Edible Odyssey, covers her spiritual journey through the exciting and tumultuous era of the late 60's and early 70's. Siren's Feast contains over 40 recipes from her Armenian childhood as well as the many countries she has visited.