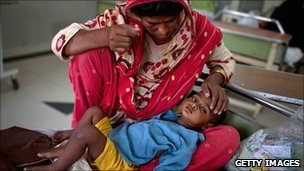 Pakistan’s prime minister says the government is “seriously concerned” about the potential spread of epidemic diseases in the flood-hit country.

Doctors in many areas are reportedly struggling to cope with the spread of diseases such as diarrhoea and cholera.

The UN says more than 17 million people have been affected by the floods, with about 1.2 million homes destroyed.

There are fears of further flooding as the Indus river at Hyderabad, already at a 50-year high, is expected to rise even more.

Mr Gilani told the meeting of senior doctors, health ministry officials, UN representatives and members of non-governmental organisations that Pakistan was experiencing “the worst natural calamity of its history”.

“As human misery continues to mount, we are seriously concerned with spread of epidemic diseases,” he said.

“There is likelihood of water-borne diseases such as cholera, diarrhoea and dysentery, especially in children who are already weak and vulnerable.”

Pakistan’s national health co-ordinator said the immediate health situation in the flood zone was under control but the threat had not passed.

“Health problems usually arise in flood-affected areas after four to six weeks, and we need to be alert and prepared to tackle the situation,” Dr. Jahanzeb Orakza said.

The BBC’s Jill McGivering in Islamabad says the health meeting appears to be an attempt by the government to improve its co-ordination amid growing criticism about its handling of this crisis.

Doctors in some flood-hit regions are overwhelmed by health problems including skin rashes, dehydration and diarrhoea, says our correspondent.

The flooding has already killed nearly 1,600 people, but millions are considered to be at risk from water-borne diseases.

UN officials have described the humanitarian situation in Pakistan as critical.

“The floods are outrunning our relief efforts. We move faster and faster, but the finish line keeps moving further ahead,” UN spokesman Maurizio Giuliano told AP.

Relief camps have been set up in Sindh province but access to them is strictly controlled and only a fraction of the affected people have found a place in one.

Some people told the BBC that because they had lost their identity papers when they fled their homes they were not being allowed to register in the camps or to receive aid.

The World Food Programme says it already has enough food in Pakistan to feed six million people for a month but distribution has been hampered by a lack of resources and the country’s shattered infrastructure.

Spokeswoman Emilia Casella said supply lorries were having to take long detours and aid was being carried in by hand in some areas. Helicopters were also carrying out air drops of high-energy biscuits in the more remote areas, she told a news briefing in Geneva.

Sindh province irrigation minister Jam Saifullah Dherjo said officials were strengthening the Indus river’s embankments but that some 600,000 people in low-lying areas were in danger and being urged to leave.

But thousands of people across the country are reported to have refused to leave their homes, fearing losing what little they have to looters.

Pakistani Finance Minister Abdul Hafeez Shaikh is due to attend talks with the IMF on Wednesday to discuss easing restrictions on its $11bn loan package so it better fits the country’s new economic reality.

Officials say the floods have destroyed more than 1.7m hectares (4.25m acres) of land, which will have a significant impact on the agricultural sector and the country’s economic growth.

The IMF’s regional director, Masood Ahmed told Reuters the flood would have “a major and lasting impact” on Pakistan.

If you would like to make a donation to help people affected by the floods in Pakistan, you can do so through the UK’s Disasters Emergency Committee at www.dec.org.uk or by telephone on 0370-60-60-900.

Click here for the original article on BBC News.

by BBC News
"They are still surrounded by floodwater, but people in parts of Pakistan are already starting to rebuild.The damage is extraordinary. The sheer force of the rushing water swept away everything in its path - even roads and bridges. Recovery will be long and slow.People here are desperate and increasingly angry. Earlier the prime minister dashed to a flood-affected area to show his face and offer sympathy. But some here were furious and simply couldn't contain their rage. The message to the government: you've done too little, too late." Jill McGivering BBC News, Islamabad