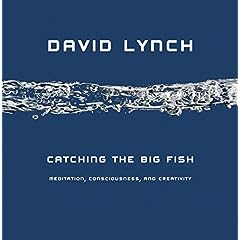 Filmmaker and multi-Oscar nominated director David Lynch has presented us with what fans call a “rare look” into his life. Catching the Big Fish, (Meditation, Consciousness, and Creativity) is not a book explaining meditation as much as David’s thanks to meditation for most if not all of his success.

David takes you on a brief walk through his likes and dislikes while explaining just how meditation helps him on the way.

Catching the Big Fish, is one giant analogy for the underlining theme of the entire reading. The book begins, “Ideas are like fish”. The point here is that if you wade in shallow water your whole life you will catch shallow water fish that serve virtually no purpose. It is only after diving (Meditation) into deeper water, (the Unified Field) that you will begin catching larger fish (Ideas).

David explains early in his book that when he first heard about meditation he had no interest in it. Like many people, it seems as though David thought it was a “waste of time” that would yield few if not no rewards. Filled with anxiety and fear, David was depressed and often angry.

One day David’s sister called with a change for the better in her tone. She was happy. His sister informed him that she had been doing Transcendental Meditation for six months and David decided that this was the road he wanted to take.

It was July of 1973 and David experienced his first 20 minute dive into “an ocean of pure consciousness, pure knowingness”. He has now not missed a meditation in thirty-three years; Meditating once in the morning and then again later in the afternoon.

In the chapter titled “Advice”, David gives just that.

“Stay true to yourself. Let your voice ring out, and don’t let anybody fiddle with it. Never turn down a good idea, but never take a bad idea. And meditate. It’s very important to experience that Self, that pure consciousness.”

I think it would help any filmmaker.

“So start diving within, enlivening that bliss consciousness. Grow in happiness and intuition. Experience the joy of doing. And you’ll glow in this peaceful way. Your friends will be very, very happy with you. Everyone will want to sit next to you. And people will give you money!”

At the end of the book I did not feel like I had wasted my time and I feel I have taken away more from it than I had initially anticipated. A book by a director / filmmaker written from the perspective of a meditator is hardly something you can rush into judging. A seasoned veteran in the field of meditation probably won’t learn much beyond inspirations for various films David Lynch is responsible for. A seasoned filmmaker will probably only learn about the effects of meditation on film.

However, unless you are a filmmaker, multi-Oscar nominated director and author of a book on Transcendental Meditation and its effects on your life and your creative outlet… I imagine you’ll come out of the experience a bit more informed than you were before.

by Eugene Kelly
David Lynch was born in 1946 in Missoula, Montana. After high school, he went to Boston to attend the School of the Museum of Fine Arts. In 1977, he released his first film Eraserhead. After a stream of films such as Blue Velvet (1986), Lost Highway (1997) and Mulholland Dr.(2001), including "Twin Peaks" (1990) TV series. In addition to that, since Blue Velvet (1986), Lynch has gained the reputation of one of the foremost auteurs in the filmmaking industry, and one of the few living auteur's who continually defies both cinematic convention and the Hollywood curse.