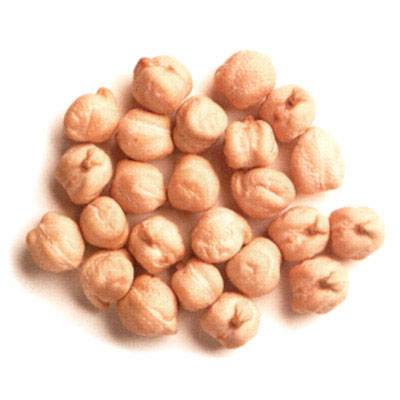 Garbanzo beans (like most legumes) have long been valued for their fiber content. Two cups provide the entire Daily Value! But the research news on garbanzos and fiber has recently taken us one step further by suggesting that the fiber benefits of garbanzo beans may go beyond the fiber benefits of other foods. In a recent study, two groups of participants received about 28 grams of fiber per day. But the two groups were very different in terms of their food sources for fiber. One group received dietary fiber primarily from garbanzo beans. The other group obtained dietary fiber from entirely different sources. The garbanzo bean group had better blood fat regulation, including lower levels of LDL-cholesterol, total cholesterol, and triglycerides.

In some parts of the world (for example, parts of India), garbanzo beans are eaten daily in large amounts and on a year-round basis. But a recent study has shown that we can obtain health benefits from garbanzo beans even when we eat much smaller amounts over a much shorter period of time. In this study, it took only one week of garbanzo bean consumption to improve participants’ control of blood sugar and insulin secretion. Equally important, only one-third cup of the beans per day was needed to provide these blood-sugar related health benefits.

Garbanzos are a food you definitely want to keep on your “digestive support” list – especially if you are focusing on the colon. Between 65-75% of the fiber found in garbanzo beans is insoluble fiber, and this type of fiber remains undigested all the way down to the final segment of your large intestine (colon). Recent studies have shown that garbanzo bean fiber can be metabolized by bacteria in the colon to produce relatively large amounts of short chain fatty acids (SCFAs), including acetic, propionic, and butyric acid. These SCFAs provide fuel to the cells that line your intestinal wall. By supporting the energy needs of our intestinal cells, the SCFAs made from garbanzo fibers can help lower your risk of colon problems, including your risk of colon cancer. Many public health organizations-including the American Diabetes Association, the American Heart Association, and the American Cancer Society-recommend legumes as a key food group for preventing disease and optimizing health. The 2005 Dietary Guidelines for Americans developed by the U.S. Department of Health and Human Services (USDHHS) and the U.S. Department of Agriculture (USDA) recommends 3 cups of legumes per week (based on a daily intake of approximately 2,000 calories). Because 1 serving of legumes was defined as 1/2 cup (cooked), the Dietary Guidelines for Americans come very close to this as they recommend of 1/2 cup of cooked legumes on a daily basis. Based on our own research review, we believe that 3 cups of legumes per week is a very reasonable goal for support of good health. However, we also believe that optimal health benefits from legumes may require consumption of legumes in greater amounts. This recommendation for greater amounts is based upon studies in which legumes have been consumed at least 4 days per week and in amounts falling into a 1-2 cup range per day.

These studies suggest a higher optimal health benefit level than the 2005 Dietary Guidelines: instead of 3 cups of weekly legumes, 4-8 cups would become the goal range. Remember that any amount of legumes is going to make a helpful addition to your diet. And whatever weekly level of legumes you decide to target, we definitely recommend inclusion of garbanzo beans among your legume choices.”

For the rest of the article, please click here!

Preparation: In a food processor, blend all ingredients together until smooth and creamy. Serve immediately with pita bread, pita chips, or veggies. Store in a airtight container for up to three days.

See also  Growing Chickpeas: How to Grow Chickpeas and Care for Them

The Benefits of Apple Cider Vinegar

Old wives’ tales have credited apple cider vinegar with everything from curing warts to making your hair shiny. Now there’s increased evidence that adding some ACV to your diet does have health benefits. Note: Some studies report similar benefits from rice or wine vinegar, but not with balsamic….

There’s been a lot of news the last few years about chronic inflammation and its debilitating effects on the body, but researchers are still unclear about the causes. Under normal circumstances, the body is supposed to “inflame” a little to mount an immune response and counteract infection — it’s when the body stays in that state that problems occur. As reported at www.easyhealthoptions.com : “ Like every system in the body, the key is balance – because inflammation does have a serious downside. It’s a slippery slope: A normal healing response can progress to an ongoing inflammatory process that spreads throughout the body under the right (or rather, wrong) conditions…”

In the Season of Giving, Food Banks Need Your Help

This is going to be a hard holiday season for many this year. Families have lost loved ones, people have seen their jobs reduced or eliminated, and the last round of government aid is due to expire the day after Christmas. For many, simply putting food on the table has become a struggle.

Dandelions May be the Health Boost You Need

Dandelion, both leaves and roots, whether grown wild or cultivated, is full of medicinal benefits. The greens can be chopped into salad, cooked like spinach, or added to juicing, while the root form can be used to make an infusion/tea or extract. Pamela Ovadje, a post-doctoral fellow at the University of Windsor, has done extensive work in investigating the anti-cancer properties of dandelions and other natural extracts. She found that an extract of dandelions can cause apoptosis, or cell death, among cancerous cells while not harming the healthy ones.

Is There an ‘All Natural’ Alternative to Antibiotics? by Susun Weed

There are good reasons to use antibiotic drugs. That said, most physicians and healthcare professionals agree that they are often overused. The overuse of antibiotics has created “superbugs” that are immune to the most common antibiotics. But on a more personal level, antibiotics can wreak havoc on your own immune system and gastrointestinal tract. The good news is that there is an all-natural alternative to antibiotics that I’ve found to be very effective.

An Autumn Menu by Nancy Mehagian

Around this Thanksgiving holiday, cook and cuisine author, Nancy Mehagian shares a favorite and easy recipe for organic turkey meatloaf.The leaves of fall are upon us, and on our streets and yards. If you live on the East Coast, your trees may be bare by now. Here, in Southern California, we’re still raking and blowing. I love it! Fall just might be my favorite season, for all the color that abounds, the changes in the air and the sight of some of my favorite produce at the Farmer’s Market. To celebrate the season, I’ve offered a few of my recipes–the ones that taste best eaten around a blazing fire.

It’s the season for sweets, including pumpkin pie, but professional cook, Nancy Mehagian shares a side dish recipe for Japanese pumpkin that’s fast, healthy and delicious. Nancy has been a massage therapist and Jin Shin Jyutsu practitioner in Los Angeles for nearly 30 years. She is the author of the culinary memoir, “Siren’s Feast, an Edible Odyssey”.

This is a wonderful Fall dish that uses two of our seasonal favorites: Butternut Squash, and Brussel sprouts. The natural sweetness of the squash and onion mellow out the brussel sprouts, and the black beans add enough protein to take this from a side dish to a main course, if you want.

A perfect accompaniment to any dish, I call my greens “nutritional dynamite.” For this dish, I prefer black kale, red Russian kale or collard greens. Feel free to mix and match. 2 bunches greens, washed well, chopped and steamed until tender. (If you don’t already own a stainless steel steamer basket, please buy this essential kitchen item.)