“Alice survived through music… Still today, she speaks with great pride and passion of playing more than 100 concerts inside the concentration camp and she likens that experience, both for the performers and their imprisoned audience as being close to the divine. Alice is unequivocal in stating that music preserved her sanity and her life — while bringing hope into the lives of countless others. To this day Alice never tires of saying; “Music saved my life and Music saves me still.” “

“Alice Herz-Sommer is 106 years old. As well as being the second oldest person living in London, England – she is more significantly the world’s oldest survivor of Hitler’s holocaust.”

” Today she’s both the last person alive on the planet who can claim to have been both a close friend of Franz Kafka and to have regularly sat on the knee of her Mother’s friend; Gustav Mahler, as a little girl. But what really makes Alice stand out from the pack is her extraordinary optimism and forbearance — her absolute conviction that despite all the terrible things that she witnessed and endured — she still can not and will not bear any trace of enmity or hatred for those who did everything in their power to terminate her existence and that of her family and her People.

As might be expected Alice is rather unique. Living entirely alone in a tiny council flat in central London she spends hours each day at her piano, practicing beloved Bach and Beethoven, for she was once a renowned and celebrated concert pianist performing to enthusiastic audiences throughout central Europe.”

“…Alice suffered experiences that no human being should have to endure. She saw both her mother and her husband put aboard the transports to Auschwitz and yet today she speaks of those times with an absence of malice and quiet grace that wins the hearts of all who know her. Along with her six-year-old son, Raphael, Alice was imprisoned in the Theresienstadt concentration camp where her most enduring memories are of her helplessness and inability to feed her child or to answer his many questions about why they and so many others were being subjected to the indescribable nightmare of the Holocaust…”

“Yet despite all that has befallen her, Alice insists that she has never, ever hated the Nazis, and she never will. Some see in her tolerance and compassion a secular saint who has been blessed with the gift of forgiveness, but Alice is far more pragmatic – she has seen enough in her life to know all too well that hatred eats the soul of the hater, not the hated. Alice laughs easily and still becomes flirtatious in the presence of young men. With her remarkable memory she’s able to keep her busy schedule in her head without a diary or the assistance of a secretary. She makes her own appointments, does her own cooking and shopping, takes two long daily walks and frequently talks with journalists, students, musicians and just about anyone else who understands and loves music.

And it’s from music that Alice derives her supreme optimism. As she’s so fond of saying; “I have lived through many wars and have lost everything many times – including my husband, my mother and my beloved son. Yet, life is beautiful, and I have so much to learn and enjoy. I have no space nor time for pessimism and hate.”

To this day Alice Herz-Sommer still plays chamber music in the evenings with her few remaining friends. As she approaches her 107th birthday on November of 2010 she said, “I have had such a beautiful life. And life is beautiful, love is beautiful, nature and music are beautiful. Everything we experience is a gift, a present we should cherish and pass on to those we love”.

“Until the occupation of Czechoslovakia Alice had enjoyed a successful concert career in central Europe. Frequently she had been the featured piano soloist with the Czech Philharmonic and had completed a number of commercial recordings before her arrest. No surprise then that she and her son, Raffi, continued to let music sustain them whilst suffering at the hands of the Nazis. Alice played the piano at every opportunity and Raffi became the youngest cast member of the famous childrens’ opera; Brundibar frequently singing the solo role of the ‘Bird’. (We can still see a fragment of his performance in footage from Kurt Gerron’s infamous 1944 propaganda film ‘The Fuehrer Builds a City for the Jews’ ”

“Alice was raised with an emphasis on Jewish cultural and ethical values rather than religious dogma. Today she loves to say “I am Jewish, but Beethoven is my religion.”

“Alice’s mother and husband passed through Terezin on their way to Auschwitz where they were gassed. As well as performing in more than 100 concerts in the camp Alice devoted herself to the physical and emotional protection of her son. As an adult Raffi had remarkably few dark memories of ‘Terezin’, saying that his mother somehow managed to protect him from the worst realities of life at the mercy of the Nazis. He once wrote that Alice managed to create a Garden of Eden for him in the midst of that hell. 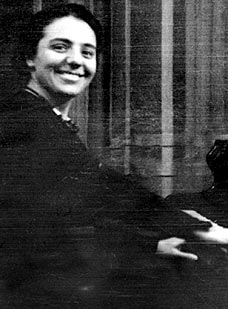 Alice and her son returned to Prague after being liberated by the Soviet Army in May of 1945. She found no one and nothing of her past. Strangers lived in her apartment – which had been confiscated by the Nazis. Already 45 years old, she made the decision to immigrate to Israel where she hoped to find other Survivors. In the “promised land” she built a new life and supported herself and her son by teaching at the Music Academy. She did find other Czech immigrants – friends and relatives – including Max Brod who had been Kafka’s close friend and biographer. The greats of Israel; Ben Gurion & Abba Eban visited Alice and listened to her play though she never revived her international career. Raffi flourished and showed serious promise as a cellist. When he won an audition and scholarship to the Paris Conservatory Alice learned French so that she could stay in touch with him through letters. Suddenly alone again – Alice persevered.

After becoming a successful cellist, Raffi settled in England where he married and had two sons. Shortly before her 100th birthday Alice decided to retire from teaching and to emigrate once more, this time to England to be near Raffi and her grandchildren. But disaster struck shortly after she moved to London when Raffi died suddenly in Israel while on a concert tour with the Solomon Trio. Grief-stricken, Alice was hospitalized for weeks before she gradually began to recover from the shock and sadness. Then, around the time that she turned 100 Alice took up the study of philosophy to bolster her indestructible spirit, to try and make sense of everything that had befallen her, and to keep her insatiably curious mind alive. “

To view the original article and for more information, please visit www.nickreedent.com.

JUDE — My Reincarnation from Auschwitz by Jewelle St. James

“My musical journey began when I was young. Drums were a regular part of our lives. In the summer were the war dances, now called powwows. As kids, we would imitate the drummers on my mother’s galvanized washtub. The very first time I heard the flute, I was a young boy living on the Northern Cheyenne Reservation located in Southeastern Montana. Grover Wolfvoice was the flute man playing this wonderful music. The music was beautiful to my ears, yet it scared me. There was much poverty and depression at that time. The sound of the flute touched my heart, where there was much pain and uncertainty. Through all of the hardships of reservation life, the beauty and wonder of our homeland beckoned to me.” -Joseph FireCrow

Ascension: Elevating the Harmonics of Life by Gene Krackehl

2012 is approaching and we are all currently facing the most crucial decisions of our existence. Presented with the choice of continuing our present destructive, downward spiral or instead choosing to raise our collective frequencies and consciousness, elevating our spirituality, overcoming our human nature, healing our relationships with each other and in doing so, our planet as well. The latest album is 9 tracks of all music and takes over where his last one left off.

Creative Visualization: Use the Power of Your Imagination to Create What You Want in Your Life by Shakti Gawain

In Creative Visualization: Use the Power of Your Imagination to Create What You Want in Your Life, Shakti Gawain explains step-by-step how we can use our natural creative imagination in a more conscious way to create what we truly want- love, fulfillment, enjoyment, satisfying relationships, rewarding work, self-expression- whatever our hearts desire… Filled with meditations, exercises, and imaginative techniques for self-improvement, this book also includes the Creative Visulaization Meditations CD narrated by Shakti with guided meditations based on the book.

Born in India, Kalidas moved to America at the age of five. He graduated from Vanderbilt University and spent the next ten years working in spiritual communities in the Southwest, mainly from the Hindu and Buddhist traditions. He has created three CDs based on his experiences with sacred chant. ” Bhakti yoga consists of channeling all of one’s energy to the Divine. The theory is simple: by thinking of the Divine, by contemplating the Divine , we can become Divine…In this tradition, all are embraced. Every one of us has the seed of divinity, no matter how deeply it may be buried.” Kalidas

Energy Journeys is a guided visualization C.D. with six wonderful tracks totalling 63 minutes of healing sound. This C.D. is absolutely worth investing time into! A Healing Journey: Words, Music, & Sounds to Help You to Healis another great C.D.! Krackehl uses a “unique combination of instruments, specific sounds, keys and notes that correspond to the chakra system and auric fields that surround the body.” When these are clogged, “they impede on the body’s immune system.” Leave stress and despair behind and find relief, joy and hope!

Poet and Jungian psychoanalyst Clarissa Pinkola Estes said it best: the simplest ingredient for healing is stories. And what could be better than legends about a Nigerian tortoise, a Chinese dragon and an Australian kangaroo? ANIMAL MAGIC, a one hour CD (the second in the TELL ME A STORY series), is full of folktales from seven countries around the world. Amy Friedman writes the adaptations of the myths, Laura Hall sets them to music and a variety of actors read them on CD.

Chords of the Cosmos: Harmonies of the Zodiac

“Chords of the Cosmos” fine tunes our entire body to the musical order of the universe with a deeply healing sound journey around the zodiac wheel.

“Mali Music” is CD I love, a blend of Malian music with western technology created by Damon Albarn. In case you have yet to go to Mali it is poor country on the southern edge of the Sahara, landlocked and difficult to get to. It has recently become well know as a source of “World Music”.

The Eternal Om by Robert Plast

Here at Merlian News, we have started to recommend a selection of music for relaxation and meditation. We hope that this music will help you to find your inner-peace and calm. In many cases the music also has a powerful healing effect.